The Discovery of Gold 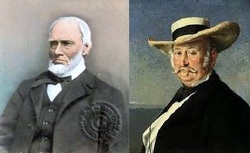 James Marshall (Left) and John Sutter (right)
In 1847, a man named John Sutter was in desperate need of a sawmill to finish building his flouring mill and other buildings for a small village of Yerba Buena, which is now San francisco.He decided to  hire  James Marshall and his crew to build a sawmill near the American River in Coloma, California. This location was just forty-five miles away from Sutter's Fort in Sacramento.

Marshall and his crew were set to work.In the morning of January 24,1848, Marshall went to check his crew's progress and  found what he thought was gold. He approached John Sutter, in private, requesting to close the door and lock it. Marshall took out a rag from his pocket and unfolded it. What he had presented to Mr. Sutter, was yellow metal, claiming it was gold.. Sutter didn't believe him at first, but then tested it with aqua fortis ( chemical solution to help dissolve gold). Both men had discovered they had 23 carat gold.